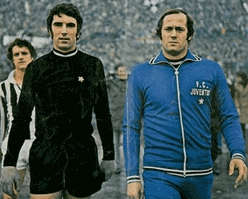 At the end of the 1970-71 season, Juventus play in the final of the Coupe des Foires against Leeds. For the occasion, Juventino leader Italo Allodi has the idea to wear a blue jersey, in order to mark the “Italianness” of Juve.

And even if the Turiners bow to the final, the blue will be kept for the jerseys away until 1983.

The blue is then also used for the tracksuit jackets of Juventus.

With this azzurra jacket with bianconeri lining, Juve players entered the field during important matches of the time: the 1977 UEFA Cup final (won against Athletic Bilbao) or the final of the UEFA Europa League.